Higgledy piggledy
Denverite wannabe
Overcomes shyness
To be in a play

Unskilled in thespian
Matters his acting is
(Characteristically)
Pretty okay

2012 The Merchant of Venice

2012 The Secret to Raising Successful Children

I dig insipid things. Living is zipping, it is spinning, mixing kind tidings with grim. Within implicit limits in which ifrits sting; in which mist is rising, inhibiting sight. First glimpsing bliss, finishing in sin. This wit is ill-fitting. I stir; mid listing ships I swim, finding in viscid filth vivid light.

This is David’s second year with SCIT; once again he utterly failed to score with any classics chicks. His future plans include to begin smoking tobacco and later to die from it.

Co-producer with Jenny Barin and Catherine Zaw. February 16–17, 2013 at Roble Theater. With Stanford Asian American Theater Project. I was AATP’s events manager from May 2012 to March 2013. 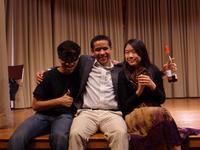 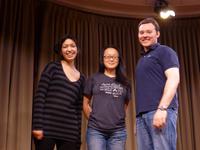 Two teams wrote, directed, and rehearsed new plays over 24 hours, with performances at the end.

David hopes to one day win the Tony award for Being On Time for Rehearsal.

Otis and Us tumblr!

My photos and Hans’s photos!

Otis and Us music recordings at the Internet Archive.

Directed, played Edek. April 23, 2014 at Chevron Auditorium. With members of the Beginning and Advanced Polish classes (SLAVIC115A and SLAVIC115B) of Katarzyna Zacha. Part of Words in Action, a series of short performances in many foreign languages.

This is a fragment (the end of Act II) of the Polish play Tango by Sławomir Mrożek. We had listened to a radio performance of the play and read parts of the text in class. We decided to perform it for Words in Action. The actors were the entirely of the Advanced Polish class and two members (Tommy and Tanya) of the Beginning Polish class. It was my first time directing.

Casina, or, Forgiveness, or, The Stratagem Defeated, or, Butts.

I am large, I contain turpitudes.

Horatio is the counterpart and complement to Benjamin Barrow (q.v.) in the titanic twosome Barrow & Birdbath. He left a promising career in the high-flying field of professional bird call imitation for the glitz and glamour of the stage. In private life he is a man of convictions (one for forgery, one for loitering).

Played Pete Endeavour. May 23 and 24, 2015 at Pigott Hall and January 6, 2016 at the Hilton San Francisco Union Square Hotel for the 2016 SCS/AIA Annual Meeting. With Stanford Classics in Theater and the Committee on Ancient and Modern Performance. Bio:

In his dread Berkelian lair David whiles away the lonely hours. The dial in his freezer goes all the way up to 6, but he generally finds that a setting of 2 does him well enough. He may not be a classicist but he knows what a genitive case is, damn it.

October 8, 2016. Audio performance (in the style of a radio drama) of The Post Office by Rabindranath Tagore, using the 1914 English translation by Devabrata Mukherje.

December 3, 2017. Audio performance (in the style of a radio drama) of The Caucasian Chalk Circle by Bertolt Brecht, using the English translation by Eric Bentley. Directed by Primal Wijesekera.